India is rich with Art and Crafts.  As a part of Art in India, painting has a long and rich history. And Miniature painting is the most popular and fine art in Rajasthan.

The art of painting patronized by the Hindu rulers of Rajasthan and in the Punjab Hills, which succeeded Mughal paintings, is called Rajput Paintings. During the Mughal rule, the Surat area in Gujarat was the foremost part in India. Goods from the Middle East and Europe reached India through Surat and Indian manufacturers were also exported from there to the West. These trade routes passed through Rajasthan. The Rajas levied duty on the goods’ transit, and the trade in general was a good source of income for them. Thus they were able to employ artists, including those who had left the court of Delhi (Mughal court).

Apart from this, there was also a spiritual revival in Hinduism. The worship of Krishna the loving God, spread all over India. Krishna’s worship inspired the mystical literature of the 12th to 16th centuries. The literature in its term inspired Rajput painting in Rajasthan and in the Punjab Hills.

Rai Singh (1571-1612) was a distinguished general of Akbar. He built the fort of Bikaner in 1589. He was in contact with Mughal Painting. Karan Singh (1631-1669) a contemporary of Shah Jehan and Aurangzeb, employed Ali Raza as a local artist. ”Ragamala” flower, and harem scenes were popular with the artists. Ustad Hamid Raknuddin was a distinguished artist whose paintings are characterized by elegant nervous craftsmanship and delicate harmony of colours.

After the introduction of the Swami family in this art, all its members became artists specialized in nature paintings and fresco work, and recognized masters in the soft colors schemes, using only natural pigments and stone colours for miniature paintings! And for the first time the Miniature masters adopt the technique of front profile anatomy in their Painting. 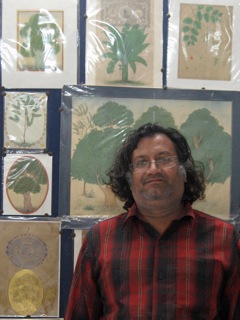 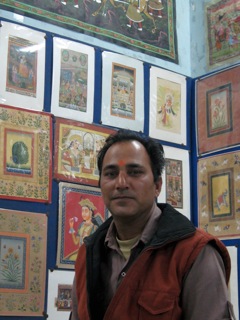 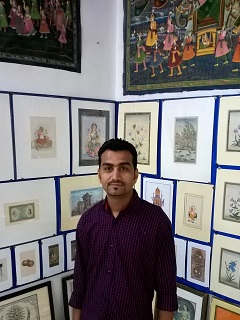 The Gangaur paintings of Rajasthan are done on the wall, and folk in style. By Mukesh swami 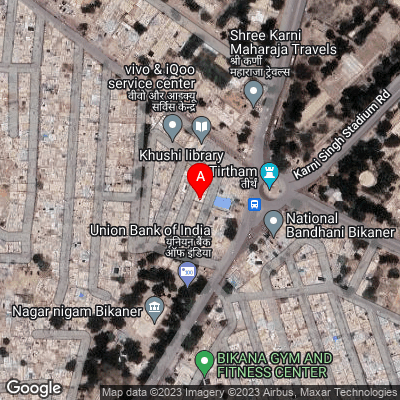